When you’ve built a reputation as the spring break capital of North America, party expectations tend to run high. Every day is a party at the hugely popular beach club and restaurant on Médano Beach in Cabo San Lucas, México. Its Fourth of July and Halloween bashes are legendary, as are the daily contests and bigger-than-life characters. But no party is more epic than the annual New Year’s Eve bash, and this year was no different. The 450 people who celebrated New Year’s Eve at the famed beachfront restaurant and bar can surely attest this party not only met but exceeded expectations.

Of course, the dinner and decorations were only part of the show. Live music and free-flowing drinks got the party started, and guests who made it till midnight were treated to a firework spectacular that erupted over Médano Beach and the Cabo San Lucas Bay. It was a sight made all the more sensational as they sipped Champagne and danced on the beach.

Pulsar band will be present here is an example of their work:

Clam chowder: Creamy clam and potato soup with a touch of bacon and herbs.

Filet mignon, with a touch of anticucho salsa, grilled shrimp in sauce of yogurt and spices, served with mashed potatoes with a touch of truffle oil, steamed asparagus and broccoli caramelized in hibiscus sauce.

Pavlova: Meringue cookie with a topping of whipped cream and berries over a strip of red sauce reduction. 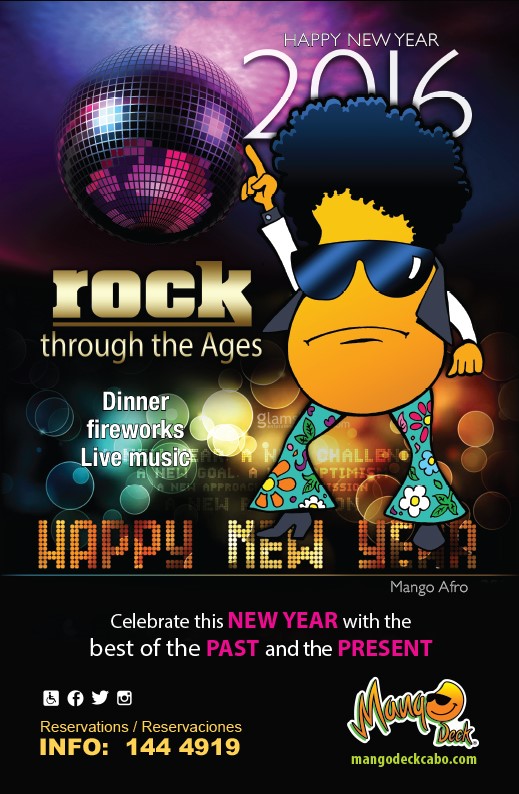